“This book is intended to make it impossible, ever again, for anyone who cares about architecture to say, ‘We drove by Buffalo on the Thruway, but decided not to stop because there’s nothing there to look at—is there?’”[1] opens the architecture critic Reyner Banham in his dedication and introduction to Buffalo Architecture: A Guide. “Anybody who knows enough of architecture to care about it will already know that two of the world’s most celebrated office buildings were built here: Adler and Sullivan’s Guaranty Building of 1896, and Frank Lloyd Wright’s Larkin Administration Building almost a decade later,[2]” Banham continues. I open this blog post with a Banham quote because as unbelievable as it is, people still ask me why I went to Buffalo for vacation, because as some say to me, “there’s nothing to see there.” Of course, they’re wrong for reasons I outlined in my first blog post on Buffalo.

I had such an exceptional time exploring Buffalo on my own—seeing its world class buildings, wandering through many streets looking at the grand old houses, visiting the Albright-Knox Art Gallery, and talking to the people of Buffalo, in particular my Lyft drivers who were insightful, funny and welcoming. I’ll never forget about my personal tour of the Kleinhans Music Hall (thank you Twitter for making this happen, a dream come true indeed) or visiting the Darwin D. Martin House during an intense downpour that lasted for about an hour or so.

While Boston also has many great buildings, I came back home a bit jealous of those who live in Buffalo. Experiencing Adler and Sullivan’s Guaranty Building and Eliel and Eero Saarien’s Kleinhans Music Hall—both astonishingly gorgeous structures—made me go through an episode of Stendhal’s Syndrome. My heart wanted to jump out of my chest, I felt dizzy and short of breath, I started sweating and most likely even hallucinated for a few seconds at the sight of so much beauty. SO. MUCH. BEAUTY. I recall uttering out loud the words “remarkable” “incredible” “gorgeous,” every two seconds while experiencing both of these buildings and I suspect both the security guard at the Guaranty Building and the lovely staff member who gave me the tour at the Kleinhans Music Hall, thought I must have been insane.

In my travels in Buffalo, I learned that Buffalonians are damn proud of their city. “It is always nice to see when someone actually comes here, and then has nice things to say,” points out a Buffalonian in a recent email to me in response to my first blog post on the city. “I too am a huge fan of architecture, and feel so fortunate to live in a place with so many incredible works of art,” the reader continues.

I’m totally smitten with Buffalo in case you haven’t yet noticed, but let’s get to the point of this blog post on the architecture of Frank Lloyd Wright in the city.

Frank Lloyd Wright’s legacy in Buffalo began with the Larkin Administration Building—a building so iconic and innovative that it was immediately hailed “as a triumph of modern architecture and office building design by European and American architects, critics and historians alike.[3]” The Larkin Administration Building was a steel-frame construction building and featured skylights, air conditioning and a large interior courtyard that allowed for air circulation throughout the building. As typical with Frank Lloyd Wright buildings, it also included built-in metal furniture, file cabinets and desks all designed by Wright. Regrettably demolished in 1950 despite much opposition from preservationists and other citizens, the Larkin Administration Building placed Buffalo on the map. It also garnered a handful of other commissions for Frank Lloyd Wright in the city including the most impressive house I’ve seen in the northeast—The Darwin D. Martin House. (For the record, I have yet to see Fallingwater, but that’s on my list).

Located in the Parkside neighborhood of Buffalo, the Martin House Complex was commissioned by Darwin D. Martin, a principal at the Larkin Soap Company. Constructed between 1903-1905, the Complex is made up of the Martin House—one of the architect’s most important commissions—the Barton House which was the first building constructed on the site, the Carriage House, the Gardener’s Cottage, the Conservatory and the Pergola. (Both the Conservatory and Pergola are reconstructions of the original structures which were demolished in the 1960s and replaced by an apartment building. The apartment building no longer exists). In my humble opinion, a trip to Buffalo is not complete without going on a tour of the Martin House Complex. The docents are terrific and as a former docent at H.H. Richardson’s Trinity Church in Boston, I can assure you that the tours are of high quality and very informative. As an added bonus, the Parkside neighborhood is also gorgeous. Having been laid out by Frederick Law Olmsted, make sure you spend some time either driving around or walking some of its streets (walking around anywhere always wins in my book). 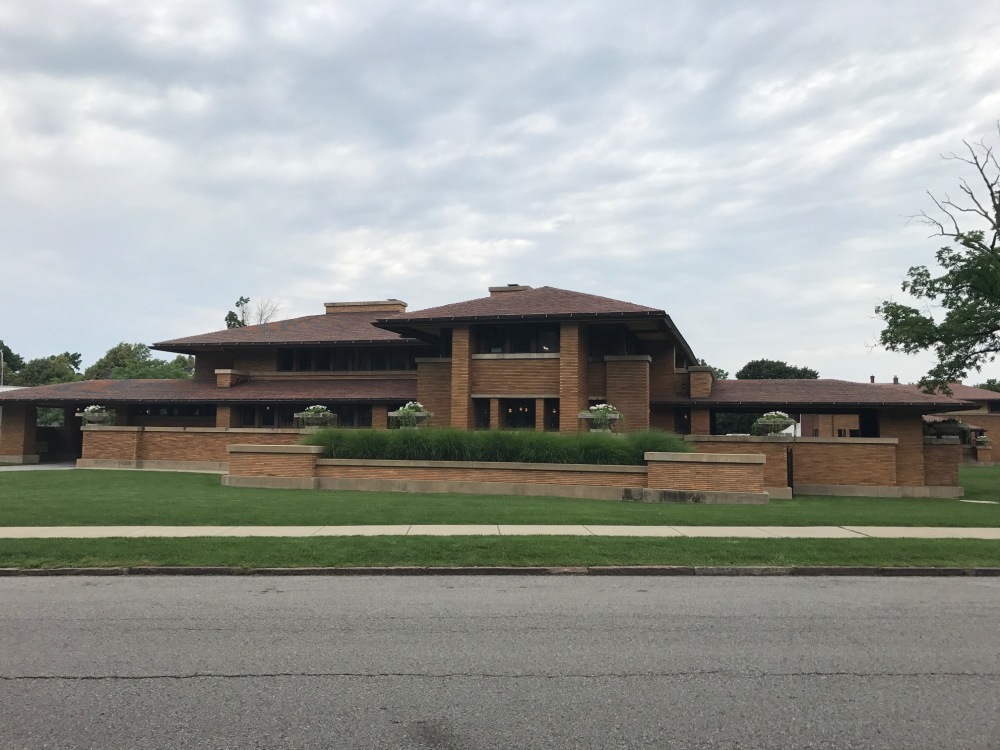 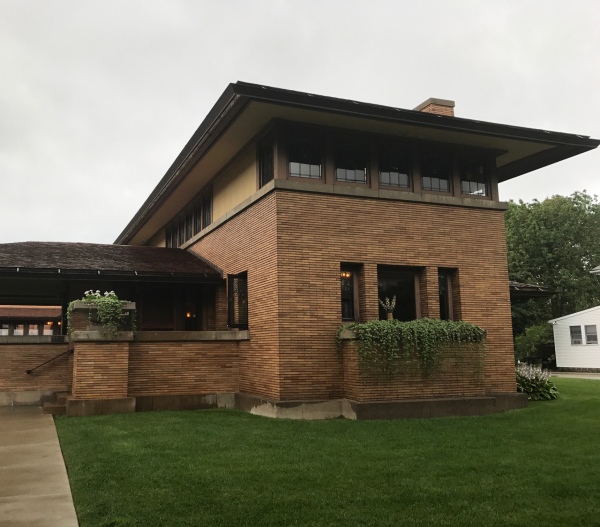 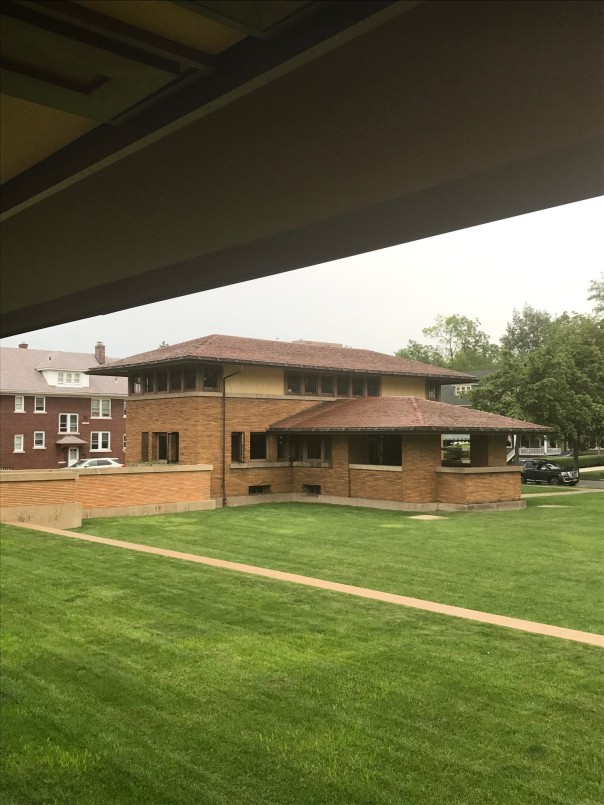 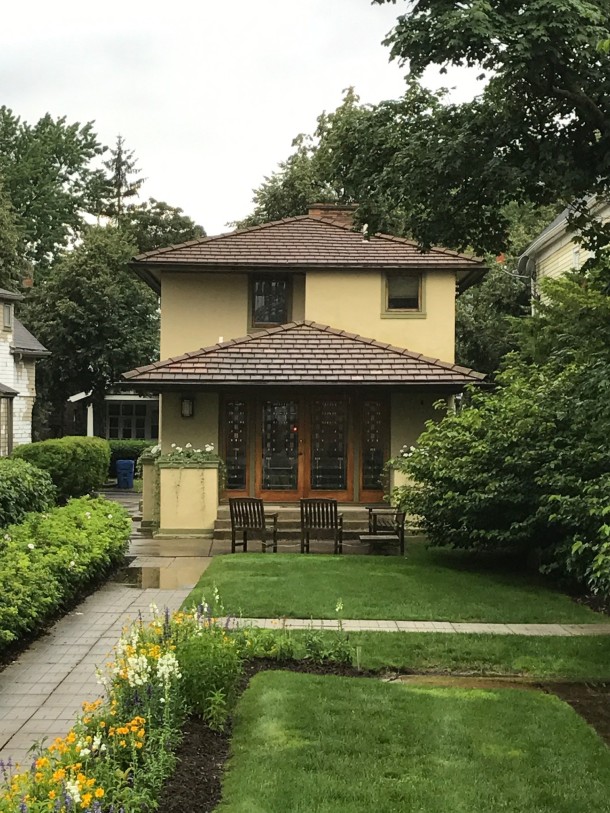 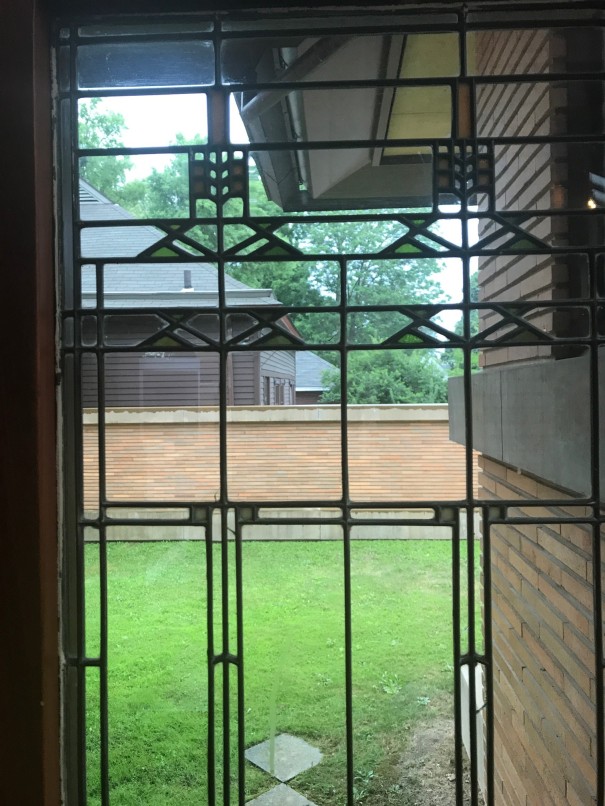 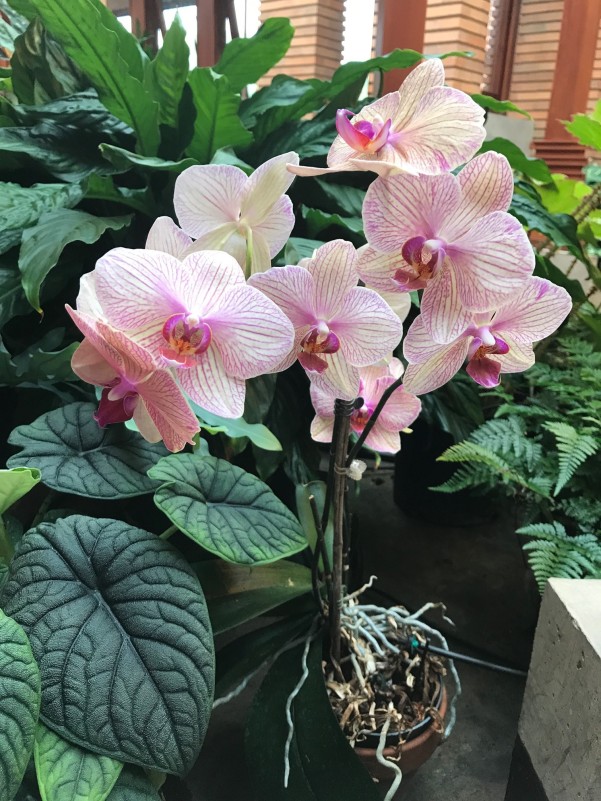 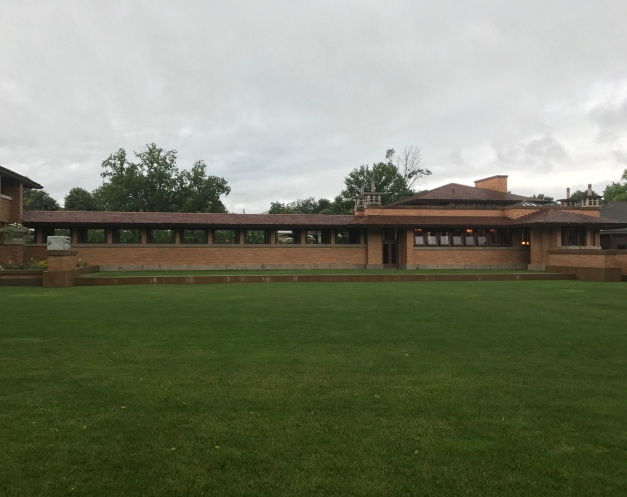 A short walk from the Martin House is the Walter V. Davidson House from 1908.  Another executive at the Larkin Soap Company, Davidson had a modest budget for his house which is reflected in Wright’s choice of materials: stuccoed wood construction. “With this in mind, Wright seems to have traded material richness for the non-material possibilities of space and light,”[4] write the authors of Buffalo Architecture: A Guide in the entry for the Davidson House. 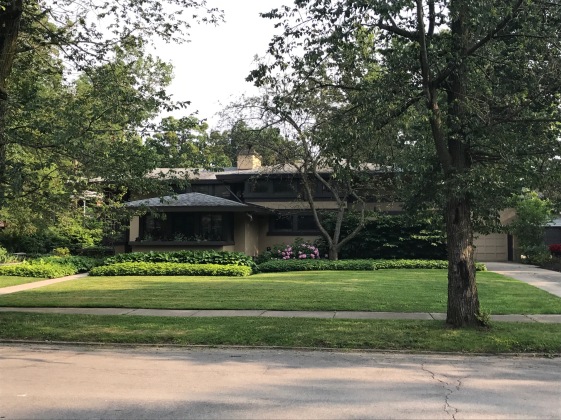 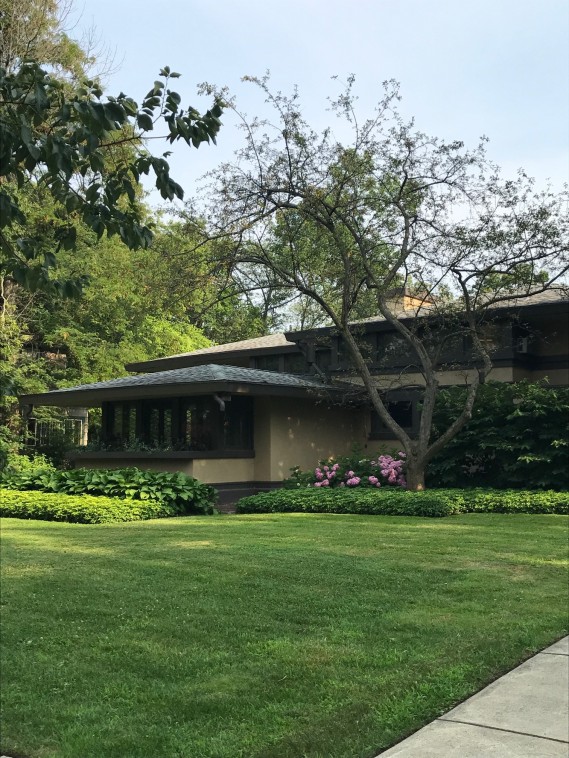 Located on the outskirts of the Elmwood Village neighborhood, the William R. Heath House was constructed between 1904-05 in the Prairie Style. The house is very much a precursor to the Robie House in Chicago, IL and a great addition to the architecturally rich Elmwood neighborhood. 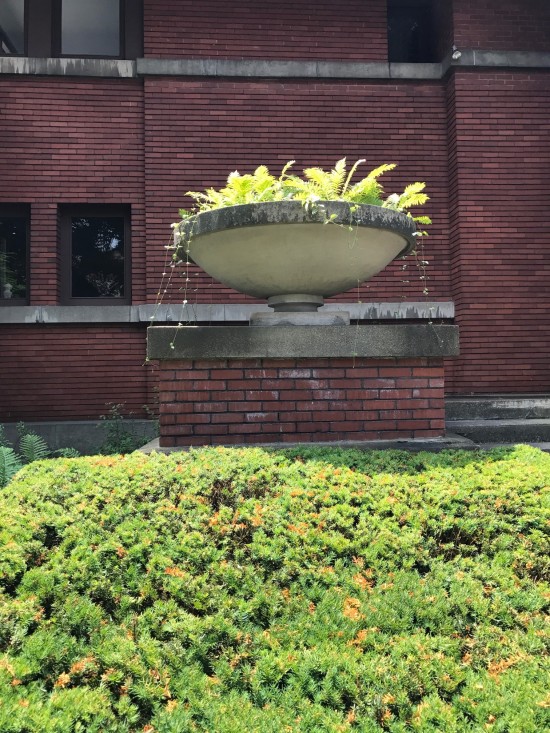 Shortly after admiring the architecture of the Heath House I went to Forest Lawn Cemetery to visit the Blue Sky Mausoleum. Designed in 1928 for his friend Darwin D. Martin, the mausoleum is one of three works in Buffalo by Frank Lloyd Wright constructed after the architect’s death, the other ones being a gas station and a boat house. This work in particular was constructed in 2004 on the same site chosen by both the architect and client. 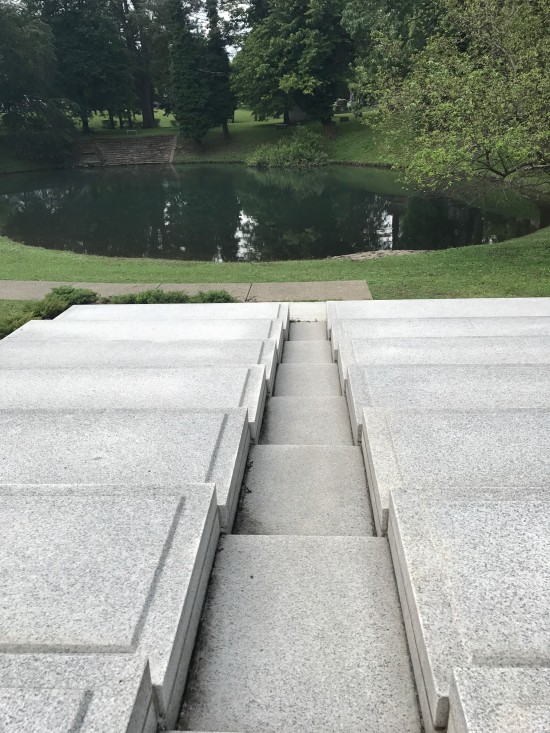 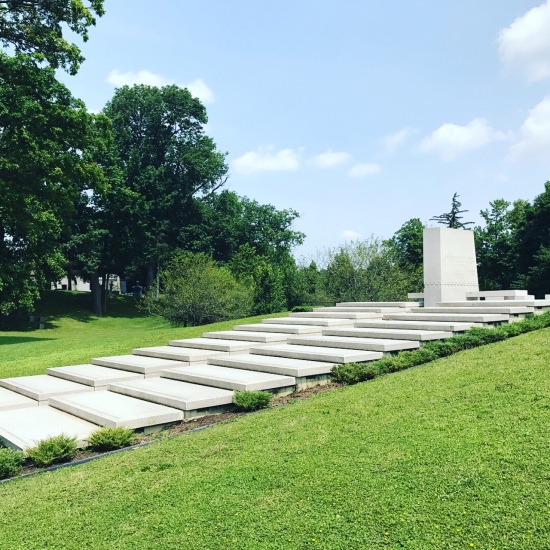 On the same day I visited Forest Lawn Cemetery, I also visited the Pierce Arrow Auto Museum nearby where the Larkin Administration Building used to stand. After walking past desolate parking lots and beautiful industrial buildings in need of some rehabilitation work, I eventually found the entrance to the museum (man, if this is not the most confusing entrance to a museum, I don’t know what is. I can attribute the confusion to not only the poor design of the building, but also poor signage). Frank Lloyd Wright designed a gas station for Buffalo in 1927, but it was never built until 2014 and it now forms part of the collection of the Pierce Arrow Auto Museum. Seeing the gas station was probably one of the oddest architectural experiences of my life. The museum itself is cramped, filled with thousands of memorabilia (with no end in sight) and a few dozen vehicles that attempt to illustrate the history of transportation in Western New York. Inside, the gas station feels even more cramped surrounded by more than a handful of antique cars and carriages that detract, rather than enhance the structure by Frank Lloyd Wright. I’m glad I got to see the gas station on this visit, because it will probably be the first and last time I step foot inside the Pierce Arrow Auto Museum. 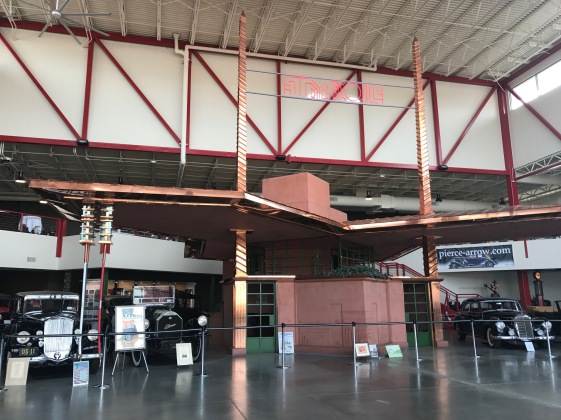 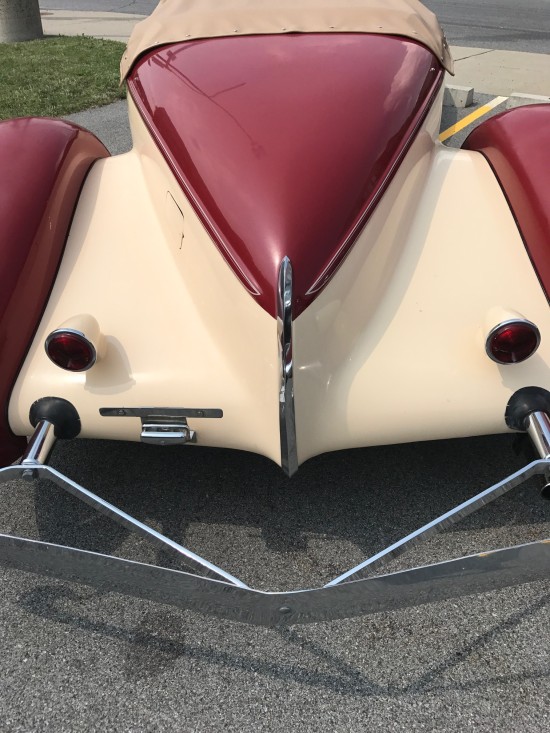 A sliver, and yes, I mean a sliver of the Larkin Administration Building can be seen a block or so from the Pierce Arrow Auto Museum, but I didn’t even make an attempt to see it. It would have been too difficult for my heart to recover from the loss of such a great work of architecture. Instead, I hopped on the Metro and then a bus and camped out at a coffee shop in Elmwood Village and recouped, ate some good food and planned out my last day in Buffalo—a city I will most definitely come back to very soon. If you visit Buffalo, please email me at evolvingcritic@gmail.com and let me know your impressions, what you saw and what you loved the most. I always love hearing from readers of this blog.