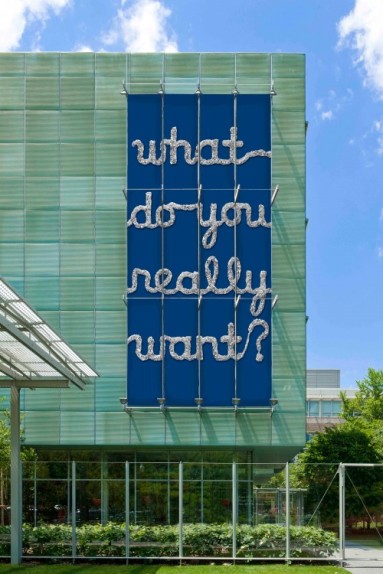 That was the subject line of a spam email I received earlier this week. The spam annoyed me more than it usually does because it appeared in my inbox, bypassing my junk email folder altogether. Currently on view at the Gardner Museum in Boston is an installation by Rachel Perry based on—wait for it—a spam email. Unveiled this week on the Anne H. Fitzpatrick facade of the Gardner’s Renzo Piano addition, the artwork is not only one of the more memorable works to have been installed on the museum’s facade, but also the most poignant to date.

Ms. Perry, a conceptual artist based in the North Shore, has been exploring among many other things, the meaning of language and how we communicate as individuals and with one another. In Ms. Perry’s oeuvre, one finds works that continue to draw upon this interest, works like the twenty-three drawings she made based on the manual transcription of her son’s 645-page medical records or her best known work to date: “Karaoke Wrong Number (2005-2009),” a video performance where the artist lip syncs wrong number messages left in her answering machine in the span of four years.

Ms. Perry’s installation at the Gardner consists of a single sentence sculpted out of aluminum foil, which she then photographed against a Bardini blue background (apparently a favorite color of Isabella Stewart Gardner). “What Do You Really Want?” is a simple yet profound question/statement that touches on many issues consuming our culture today. As humans, we’re never satisfied with what we have, do or say and whether you approach the installation in a serious or playful manner, Ms. Perry poses a question that allow us to look at ourselves and our place in the world.

Rachel Perry’s What Do You Really Want? is on view through June 2016.