A series of posts inspired by the recently opened American art wing at the Museum of Fine Arts. It highlights some pieces in Boston area museums.

Throughout history art has been used to legitimize and even achieve political power, it has been used as a vehicle for the dissemination of propagandistic messages in hopes of persuading people to change their attitude towards ideas or beliefs. The two alabaster architectural reliefs from the northwest Palace of Assurnasipal II are examples of such works of art, one of their primary functions was to legitimize the king’s rule and protect his power under enemy attacks.

Produced around 883-859 BCE in Assyria, the alabaster architectural reliefs of the winged protective deities emphasize the king’s power and importance through their monumentality and scale. The reliefs portray different winged deities with larger than life bodies. One deity is depicted pollinating a sacred tree and  another holding a small scepter. These figures were not only meant to protect the king from intruders or enemies, but to simultaneously intimidate and astonish those who stood in front of them.  The wings, depicted larger than the body themselves convey a message of power and authority. 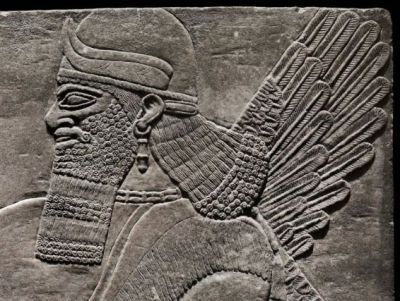 The lines in the alabaster and the shallowness of the reliefs in particular the highly detailed wings and the garment worn by the figures add a rich texture further emphasized by the light falling upon the surfaces of the stone. The subtle play of light and shadow on the relief delineates the highly muscular arms and legs, heightening the drama that was to unfold as one would approach the palace of the king. The art of the Ancient Near East would have been painted in bright colors, so the play of light and shadow falling upon the surface of the alabaster would have been different than what we see today.

Light and shadow also create a rich contrast between the soft curves of the muscles in the legs and arms with the stark linear patterns in the beards and wings. The two alabaster architectural reliefs legitimized and protected the power of the king through their monumentality, highly abstract linearity and geometry which is further heightened by the play of light and shadow falling upon the surface of the alabaster.

Have you seen this piece at the Museum of Fine Arts? They are two of the most dramatic pieces in the Art of the Ancient Near East galleries.